The relative frequency change over a certain period of time and is typically expressed as a maximum value in parts per million per year (ppm/year). Typically, aging is computed within the first 30 days to 90 days and predicted exponentially over a longer period usually a year.

Drive level is the level of power dissipated in the crystal as a result of the operating circuit. Rated or test drive level is the power at which the crystal is specified and any deviation from the rated level will effect the crystal performance; therefor the actual drive level should reasonable duplicate that specified. AT – cut crystals generally can withstand a considerable overdrive without physical damage, however the electrical parameters are degrated at excessive drive

Resistance between crystal’s leads, or between lead and case (metal case). lt is tested with a DC voltage at 100V±15V and insulation resistance is in the range of 500M Ohms.

This is an external capacitance which sets a point on the reactance curve at which the crystal will resonate. It is normal to refer to crystals which are operated with a small value of CL as “parallel resonant” and to those which are not as “series resonant”

The frequency for which the crystal/oscillator is designed and to which it is tuned.

The quartz crystal could operate at its Fundamental mode or harmonic modes. The fundamental mode is always the preferred oscillating mode. Odd harmonics such as 3rd, 5th, 7th, etc. are overtone modes.

The “static capacity” or shunt capacity of the electrodes, the holder and the leads. It is usually measured with an ungrounded case

The stability tolerance is the maximum allowable deviation from the nominal frequency over a specified temperature range and expressed in terms of ppm. This factor is dependent upon the angle of cut, see AT-cut temperature curve below. 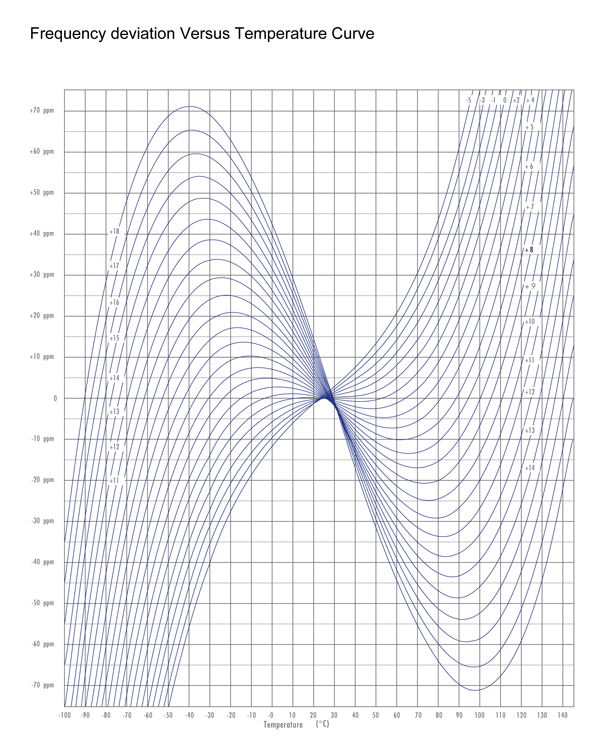